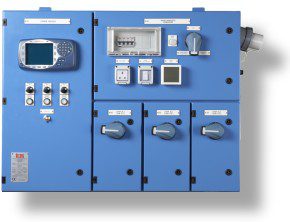 A good example which highlights the significant benefit to the client of early involvement with Technical Control Systems was one with the States Of Jersey Transport & Technical Services (SOJTTS). They indicated that they would soon be working on a project to replace a significant number of pumping station panels and telemetry outstations on Jersey. Their current thoughts were of a traditional control panel connected to a Serck telemetry outstation.

With this in mind, they were shown the Multismart Intelligent Pump Station Controller (MIPSC) demonstration panel, which was on the premises of TCS at that time. TCS were early adopters of this innovative solution and have shown this demonstration system to several major UK water companies in recent years. SOJTTS were planning to use traditional DOL & VSD controls for their pump stations, but indicated deeper concerns with the future availability of their existing PX24 Serck outstations. We took our supply chain partner from Multitrode to Jersey to give an onsite demonstration of the MIPSC product to the operations, maintenance and engineers of SOJTTS.

The interest generated from this then led to the demonstration panel being shipped to Jersey, for them to trial in one of their pump stations, initially just as a pump station controller, but secondly and more importantly with their Serck system. The existing PX24 Serck outstation was used as the interface to the top end SCX6 SCADA system. This was so they could evaluate the benefits of the MIPSC as just a pump station controller. These were very quickly realised, and the next step they took was to integrate the MIPSC directly into their SCX6 SCADA system, bypassing the Serck telemetry PX24 totally. After further field testing of the telemetry communications with both radio and GSM networks they have fully accepted this solution and placed a significant order for the replacement of a number of their pumping stations.

Due to the timescale of the contract, the order was shared between two companies. We are now currently working with the other company to ensure that SOJTTS receive standardised designs.

SOJTTS were very pleased that we were able to offer a solution to them, that provided reduced pump station running costs, reduced unnecessary call outs, and moved them away from costly telemetry solutions, and realised it would not have happened but for their early engagement with ourselves. This is also a good example of our working up, down and across the supply chain.